Although the announcement for the distribution of the smart phones was made but the captain smart connect scheme delivery date was not finalized. Now the Punjab government has decided to distribute free smartphones under mobile phone to youths in Punjab.

In the cabinet meeting held on 2nd January the government has approved the modalities for the distribution of the smartphones. In the first phase of the scheme the govt. will distribute smartphones to graduate students of government schools, colleges and technical institutions.

Under this scheme the government will distribute 50 lakh smartphones with one year free data and calling to the youths of the state. The main objective of this scheme is to provide digital access to youths and information regarding education, career opportunities, access to skill development and employment opportunities.

Punjab govt. is going complete the promise to provide smartphones to youth, numbering around 50 lakh, which was made by the Congress party in its pre-poll manifesto before assembly elections in February 2017.  The first batch of phones is expected to be distributed in March. 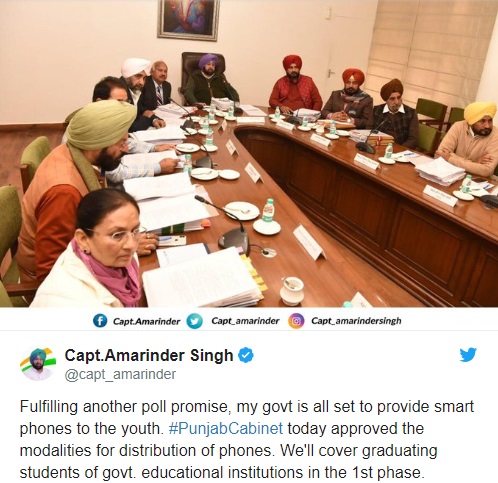 The Punjab government had announced a scheme named ‘Mobile Phone to the Youth’ in its budget for the Financial Year 2017-18. The state government had appointed KPMG as the Project Management Consultant (PMC) at a cost of Rs. 72.19 lakh for the duration of the project.

According to the official, the students would be required to submit self-certification stating that they do not already possess a smartphone.

The vendor to implement the scheme shall be selected through an open transparent bidding process for which the tender document has already been floated by Punjab Information and Communication Technology Corporation. Vendors shall be on board within a period of about two months and the first batch of phones is expected to be distributed in the month of March.