Pradhan Mantri Jan Dhan Yojana (PMJDY) / प्रधान मंत्री जन धन योजना : The Prime Minister of India, Mr. Narendra Modi launched the scheme just after few months of coming to power in May 2014. It is also called Prime Minister’s People Money Scheme. It is a National Mission for Financial inclusion to ensure access to financial services, namely Banking Savings & Deposit Accounts, Remittance, Credit, Insurance, Pension in an affordable manner. The scheme was announced by prime minister on 15 August and launched on 28 August 2014. The scheme is headed by ministry of finance.

Under the PMJDY  scheme, a saving deposit account can be opened in any bank branch or business correspondent (Bank Mitra) outlet. Bank accounts under PM Jan Dhan Yojana can be opened with zero balance. However, if the account holder wishes to get a cheque book, he/she will have to fulfill  minimum balance criteria.

The PMJDY scheme launched with the target to enroll bank account of around 7.5 million households. In this regard, the Prime Minster personally mailed to Chairpersons of all PSU banks in which he categorically declared that a bank account for each household was a “national priority”.

The PM Jan Dhan Yojana started with the target to provide easy access of banking facilities starting with “Basic Bank Account” with overdraft facility of Rs. 5,000. After six months, Rupay Debit Card with inbuild accidental insurance cover of Rs. 1 lakh and Rupay Kisan Card and in the next phase, micro insurance & pension facility will also be added to the accounts. 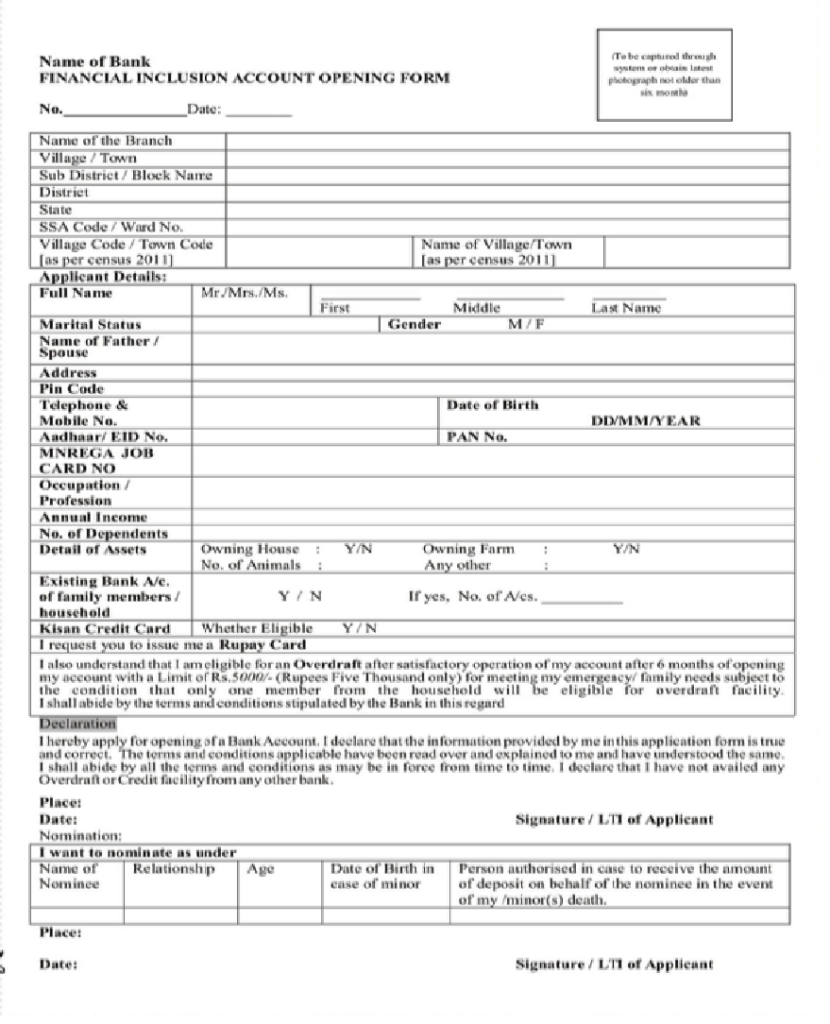 There are the following step to open an account under Pradhan Mantri Jan Dhan Yojana:

Step-1: Documents
Applicant should have documents which are permissible as eligibility proof.

Step-2: PM Jan Dhan Application Form
Applicant can obtain the Pradhan Mantri Jan Dhan Yojana form from the official website of PMJDY or any other bank website as well.

Step-3: KYC Details
Fill up with the form and attach proof document like ID proof, address and also fill this form with full details of KYC.

Step-4 Submit Jan Dhan Yojana Form to nearby Bank Branch
Submit the Pradhan Mantri Jan Dhan Yojana application form along with all document to a nearby bank branch where you want to open Jan Dhan Account.

Step-5 Verification
After proper verification of the all documents, your Jan Dhan Bank Account will be opened.