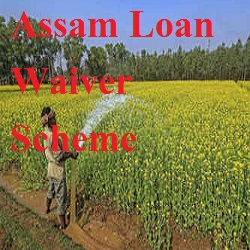 The state government of Assam has approved Assam farm loan waiver scheme to waive 25% of farmers loan amount. Under the scheme, 25 per cent of the loan amount waiver would be provided to the farmers. The maximum relief per farmer would, however, be capped at Rs 25,000, Industry Minister Chandra Mohan Patowary said announcing the Cabinet decisions.

The Cabinet also gave its nod to an interest relief scheme for farmers. Patowary said that under the scheme, a farmer can avail a KCC loan at zero per cent interest. The State government would give a subsidy of 4 per cent on KCC loans, so that farmers can avail the loan at zero interest.

Assam government has approved farm loan waiver to the tune of Rs 600 crore which will benefit around eight lakh farmers of the state, its spokesman said on Tuesday. As per the scheme, the government will write off 25 per cent loan of farmers up to a maximum of Rs 25,000 of all farm debts.

The debt relief scheme for farmers will waive 25 per cent of all loans taken till now. The benefit will be up to a maximum of Rs 25,000. This scheme will immediately benefit around eight lakh farmers,” he said.

Due to these schemes ,there will be an additional burden of Rs 600 crore on the state exchequer this fiscal. “For the next fiscal, we will have to do budgetary provision for the schemes.

The government will also take a loan of Rs 32.72 crore from the National Cooperative Development Corporation for reviving the jute mill at Nagaon.