Registration for flats at ADA Scheme 2017 at Jagriti Vihar, Kalindipuram has been started from 22 December 2016 and the last date of the scheme is 31 March 2017. But the the allotment of these flats would be done on monthly basis.

Two types of flats are available for allotment for middle income group of the society.

How to Apply:
Application form for the booking of flats in the scheme can be obtained from ICICI Bank branches by the cost of Rs. 300/-. It can also be downloaded form the official website of ADA official website at http://adaallahabad.in/ada.php. Dully completed application form along with registration amount to be submitted in the same bank branches on or before last date.

The allotment of these flats would be done through a lottery process on monthly basis. The draw result will be conducted on 20 Date for the application received from date 3 to 17 and the second lottery will be held on Date 5 for the application collected from Date 18 to Date 2. The venue for the draw result is Authority Auditorium, 8th floor, Indira Bhawan, Civil Lines, Allahabad and the draw will begin at 12:30 PM. 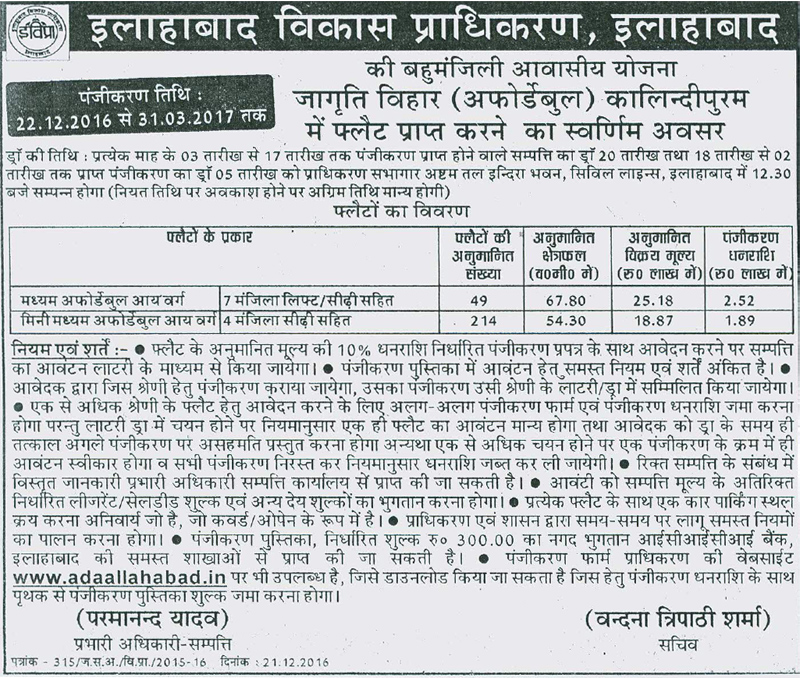 For more information visit the official website of ADA Allahabad.