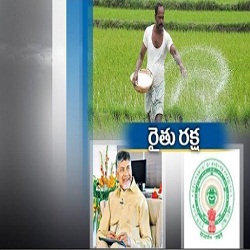 The state government of Andhra Pradesh is going to implement a new scheme for farmers. The scheme will be named AP Rythu Raksha Scheme which is already running  in Telangana. Under this scheme AP government will provide Rs. 10000 per annum to the farmers of the state.

Rythu Raksha scheme is aimed to provide subsidy to the farmers of the state for Kharif and Rabi seasons. The government ha sproposed to credit the money directly to the bank accounts of the farmers. As per the sources, the scheme will be implemented from next Kharif season in a phased manner.

The guidelines of Rythu Raksha scheme will be finalized soon by the state government of Andhra Pradesh. This scheme has been designed on the lines of Telangana’s Rythu bandhu Scheme which provides financial help of Rs. 4000 per acre per annum to the farmers for the purchasing imputs like seeds, fertilizers,pesticides, labour and other investments.

The state government of Andhra Pradesh is going to launch this scheme to provide financial help to the farmers.

With elections just round the corner, looks like Andhra Pradesh has taken a cue from Telangana government’s appeasement tactics to retain power in the state in the Assembly elections. However, being a revenue deficit state, it needs to be wary of its expenditure on doling out welfare schemes.