Uttar Pradesh Awas Vikas Parishad has again extended the registration period of UPAVP five housing projects under Samajwas Awas Yojna 2015. Earlier the last date of registration was extended from 2 June to 2 July and now it has been extended again to 3rd August 2015.

Now the applicants can register to buy their own home in UPAVP five affordable housing projects. Apply online for the UPAVP Samajwadi Awas Yojna under which 9340 flats are available for all segments of the society. The registration can also be done by offline mode of registration and details for the same are available on the official website of UPAVP.

Govardhan Enclave, Lucknow: The project is located at sector-20 Lucknow & 2400 flats are available for registration in the project. It includes 1BHK & 2BHK flats for all categories of the society. The estimated cost of flats is starts from Rs. 12.25 lakh for 1BHK.

Saryu Enclave Lucknow: The project is located in Avadh Vihar Yojna Sector -7D, Lucknow and it contains total 2344 units of 1BHK and 2 BHK flats, out of which 936 units are 2BHK and remaining 1408 units are 1BHK type.

Gomati Enclave Lucknow: The project situated in Awadh Vihar Yojna Sector-8, Lucknow. Under the project total 1968 units of 1BHK & 2BHK flats are available for registration of all categories of the society. The estimated cost of flats is starts from Rs. 12.25 lakh for 1BHK flat.

Bhagirathi Enclave Meerut: Out of all five project of UPAVP under Samajwadi Awas Yojna, it is the only project which is located in Meerut. The project consist G+3 type of 1584 apartments with three different sizes. The estimated cost of flat is starts from Rs. 8.36 lakh which goes upto Rs. 19.19 lakh.

It is again an opportunity for the applicants who have not applied for the scheme till now. The applicants can apply for UPAVP housing scheme till 3 August 2015 by online and offline mode of registrations. For more detail view the link given Below: 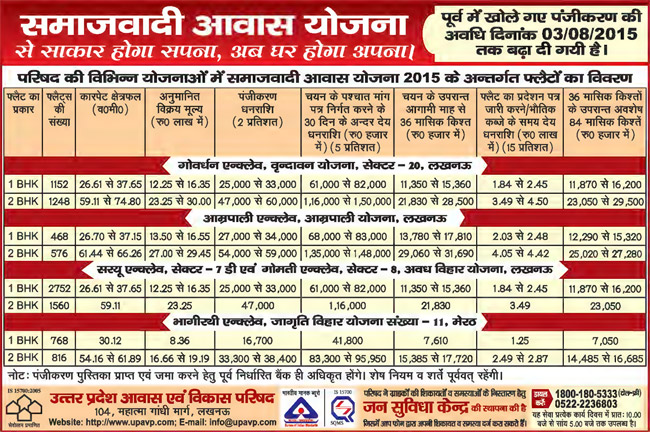