Rajasthan Housing for All: On Yesterday, 26 September 2015, Chief Minister of Rajasthan, Vasundhara Raje has announced a new housing scheme for weaker section of the society. Besides the CM has also unveiled another policy related to the allotment of land for development in urban area.

According to the source the estimated need of housing in the state is about 10 lakh by 2022 and these bunch of houses will be constructed under “Rajasthan Housing for All” scheme. Out of total, 85% of this houses would be needed by EWS and LIG categories.

To fulfill the need of housing in the state, the government has decided to construct cheaper houses in four different models. 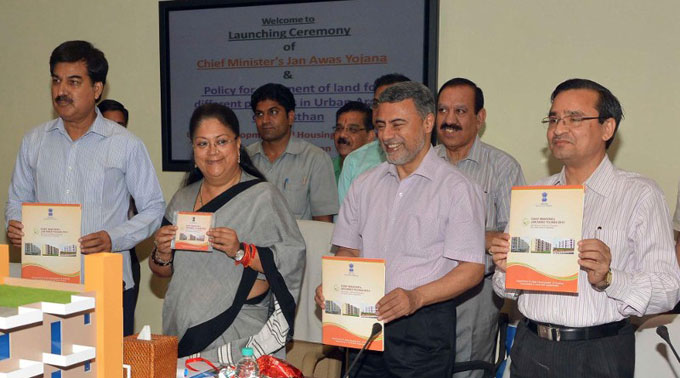 Rajasthan Housing for All

As per the scheme, 10 percent of land in the housing scheme of government and private projects would be reserved for building EWS and LIG houses while in townships of developers 7 percent land would be reserved. In returns, the private developers will get a relaxation in floor-area-ration (FAR) conditions.

The Rajasthan Housing Board, however, will now reserve 50 percent land for LIG/EWS. The Jaipur Development Authority and UITs in cities will have to reserve 25 percent land for the purpose.

While launching the scheme, CM said the policy is first of its kind consisting of various advantageous provisions and shortcomings of the old policy have been tackled and removed.

CM Raje has quoted that “both the policies will go a long way in ensuring affordable housing and making simple the allotment of land in urban areas for different purposes and with the increasing land prices and increasing prices of the building materials, it was a challenge to provide housing to thousands of urban people in all cities at reasonable and affordable prices.”

The policy of affordable housing was launched in 2009 which had modified by the government earlier. The new policy will motivate the developers to construct houses on private and government land for EWS and LIG category.

The Raje said that the policy new policy will also motivate government agencies to take up construction of affordable housing. For the smooth implementation of the policy, a Committee under the Chairmanship of Minister, UDH has been set up. She invited the various bodies of real estate developers to participate in the forthcoming Resurgent Rajasthan Partnership Summit to be held in Jaipur in November. The global investor’s summit has galvanized the government into taking effective steps in various sectors. The housing sector is our key focus area – both from the perspective of inviting investment and providing employment.

The allotment of land to the investors under the policy will become faster and smoother and more transparent and clear. The process for allotment of land has been made easier besides, the government aims to keep a strict check on the correct use of allotted land.

A fast tract approvals will be facilitated for developers to accelerate the process of construction. The policy will be available on public domain with a transparency for all development authorities.