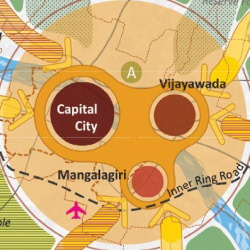 Amaravati Capital Development Plan: The development plan of Amaravati capital will be soon notified to get feedback and suggestion from the general public. Suggestions and feedback will be used by incorporating them into the plan, wherever possible.

Surbana and Jurong the Singapore-based agencies who had got the work of developing the master plan, has submitted the plan to the AP Capital Region Area Development Authority (CRDA) and the authority is in the process of giving the final touches to the plan.

After the completion of this process, the plan will then be taken up for approval at a meeting chaired by Chief minister N Chandrababu Naidu, before it is made public for suggestions. The source said that the development plan will be released before the month-end.

The master plan notification will cover the developments of various area in the city which also include some of the key building including the Secretariat, Raj Bhavan, High Court and various administrative blocks.

The Naidu government has taken to land-pooling process for the capital development wherein more than 31,000 acres of agricultural land on the Krishna banks were voluntarily handed over by the farmers, in lieu of developed land and annuity payments.