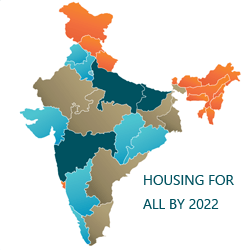 Central government has approved first affordable housing project under PM Awas Yojna (PMAY) launched by Prime Minister in June this year. The project for the approval was sent by Chhattisgarh and now Chhattisgarh has become the first state who got approval for affordable housing project under the scheme. The project is approved by inter-ministerial Central Sanctioning-cum-Monitoring Committee chaired by Dr. Dr. Nandita Chatterjee, Secretary (Housing & Urban Poverty Alleviation). The approved project comprised a proposals of constructing 26034 houses in 11 cities and towns in the state, of which 12,670 units are for EWS and remaining for LIG category.

The EWS Houses in approved projects has been sanctioned under the ‘Affordable Housing in Partnership’ element of PMAY.

Besides this, the Central Sanctioning Committee has also approved the central intervention of Rs. 190 crore for 12,670 EWS houses; average 1.50 lakhs for each houses as per the Mission Guidelines. Apart from EWS Houses, the LIG houses will be constructed under Credit Linked Subsidy component of Housing for All Mission. For this Element, Central Nodal Agencies -National Housing Bank and HUDCO (Housing and Urban Development Corporation) have been authorized to provide interest subsidy @ 6.50% on loans up to Rs.6.00 lakhs for each eligible beneficiary for a loan tenure of 15 years.

The Committee who sanctioned the project also approved release of first installment of Rs. 76 crore to Chhattisgarh government.

The component Affordable Housing in Partnership (AHP) of PM Awas Yojna is meant only for beneficiaries belonging to EWS. Under this element 35% of houses to be built shall be reserved for EWS with project size of minimum of 250 houses. The reservation for EWS in the AHP approved projects of 11 cities of Chhattisgarh ranged from 36% to 52%.