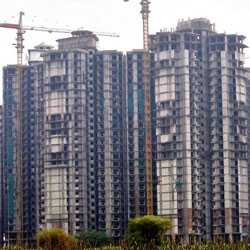 Yamuna Expressway Authority and Noida Authority are working on a proposal to launch a scheme for providing a relief to thousands of homebuyers and builders as the builders are not able to deliver flats on time citing financial crisis.

Earlier in May, three development authorities proposed a policy named as “Exit Policy” to make a way for builder to return undeveloped land to the government but the state government of Uttar Pradesh has approved the policy so far, delaying its implementation on the ground.

Sanjay Aggarwal, the chairman of three authorities said that now, we are working out a comprehensive policy and the ‘exit policy’ will be a part of it. The objective of the comprehensive policy will be to revive sick realty projects and also benefit property buyers, who have bought flats and are unable to get possession. But we need to carry out discussions before finalising the policy.

On Monday, Sanjay Aggarwal discussed the major points of proposed comprehensive policy in meeting at Noida’s Sector 6 office with senior official of the three authorities. The meeting was attended by Deepak Agarwal, chief executive officer (CEO) of the Greater Noida and Pramod Kumar Aggarwal, CEO, Noida authority, and other senior officials.

According to the source, the three authorities will finalize a draft of the comprehensive policy after detailed discussions on legal issues in the next 15 days.

Comprehensive policy draft was the main agenda of board meeting of these three authorities held on 3 October 2016. As the draft policy could not be finalized, the joint board meeting was also postponed.

The exit policy for builders in Noida and Greater Noida was expected to address the issue of delayed completion of housing projects that has been affecting homebuyers. If approved, the policy would help revive stalled housing projects, thereby benefitting buyers.

The Uttar Pradesh government and the authorities are facing many obstacle to implement the exit policy because the property buyers have invested money in group housing societies or commercial land.

An anonymous official said that the builders who have got a certain piece of housing or commercial land, have sold the plots or the homebuyers have booked flats on the land meant for housing projects. But the builders have not started construction on the ground. If the builder returns the land to the government under the proposed exit policy, buyers, who are waiting for flats, plots or commercial space will suffer. Therefore, the authorities need to look into all aspects.