Haryana government has launched Mera Pani Meri Virasat Yojana 2020 for Haryana farmers on Wednesday 6th May 2020. Government has announced to give Rs.7000 per acre incentive to farmers under Mera Pani Meri Virasat Scheme for switching from water-guzzling Paddy to other crops and said permission to sow paddy will not be given panchayat areas where the ground water depth is more than 35 metres.

Haryana CM Manohar Lal Khattar also appealed to farmers to promote water conservation and save water for the future generations in the same way they leave their land inheritance for their coming generations. 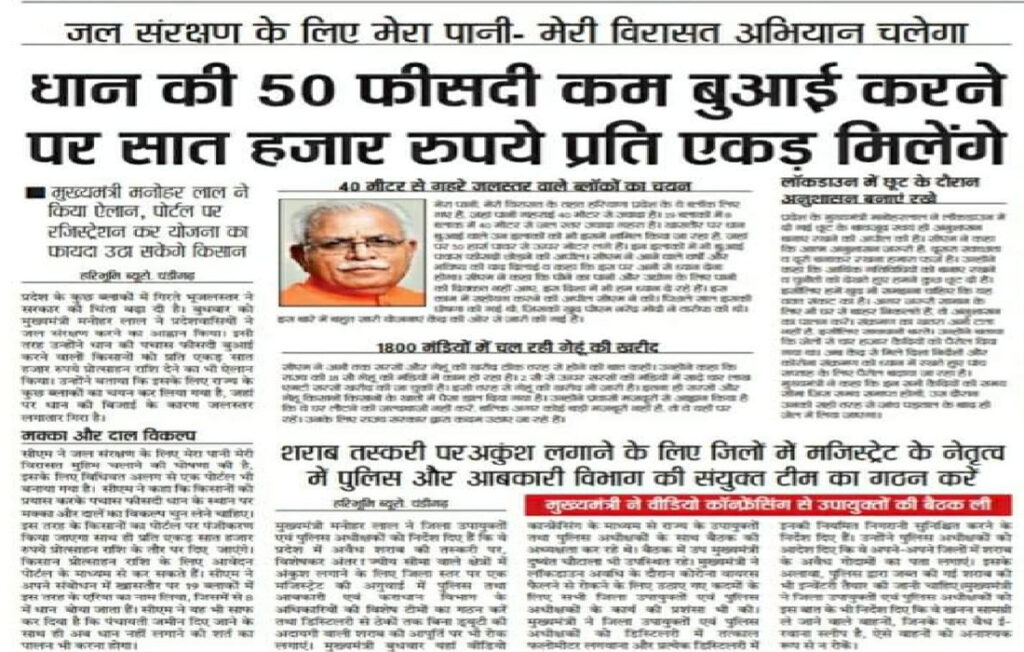 Haryana Chief Minister Manohar Lal Khattar has launched the Mera Pani Mera Virasat Scheme. Under this scheme, farmers who switch to alternative crop in place of paddy during this season would be given an incentive of Rs.7000 per acre.

CM Manohar Lal Khattar said that at present some part of the state fall in dark zone, which comprises 36 blocks, where rate of deplection of ground water level has doubled in the last 12 years.

He said that where the ground water level was earlier at 20 meters, it has now futher depleted to 40 meters. Khattar also said there are 19 Such block, where the water depth has exceeded 40 meters.

Chief Minister said the land under the panchayat, where the depth of ground water is more than 35 meters, permission would not be given to sow paddy in those panchayat land.

Manohar Lal Khattar said that agriculture equipment required for maize sowing will also be arranged by the Haryana state government. He said that 80 % subsidy is being given to the farmers who have adopted micro-irrigation and drip irrigation system along with growing alternative crops in place of paddy.

The rice procurement data from state government of Haryana for central pool in lakh metric tonnes.