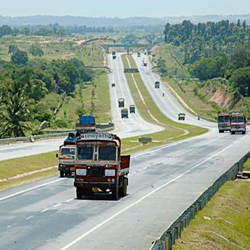 Central government of India has approved an amount of Rs. 6.72 lakh crore for the construction of 83,677 kilo meter of highways along with Bharat Mala project which is a biggest road project of India government. The government would spent the amount over the next five years. The Bharat Mala Road programme and the highway construction programme will improve the connectivity of boader areas, international port and coastal connectivity besides improvement of highway corridors connecting key economic and commercial hubs besides at least 800 km of expressways.

According to the approved plan, the 34,800-km Bharatmala project that would lay out virtually as a garland on the country, will see funding to the tune of Rs 5.35 lakh crore. As far as the resources are concerned, Rs 2.09 lakh crore would come from market borrowings, Rs 1.06 lakh crore as private investments and the balance from the Central Road Fund (CRF), toll receipts and also proceeds from magnetisation of the state-funded highways by leasing them out to private parties under the toll-operate-transfer model.

As per the information, National Highways Authority of India (NHAI) and the ministry of road transport and highways will construct about 48,887 km.

Under Bharatmala project, the government intents to build 9,000 km of highways as economic corridors, 6,000 km as inter-corridor/feeder routes, 5,000 km as national corridors, 2,000 km each as border roads and coastal/port connectivity roads and 800 km as greenfield expressways. The construction of 10,000 km still pending under National Highways Development Programme will also be taken up under Bharatmala.

The boost to border roads will help multiply India’s trade with Bangladesh, Nepal and Bhutan, besides giving a fillip to the economies of the northeastern states, Lavasa added.

The government would launch the Bharatmala project to build over 20,000 km of highways in the first phase. The Cabinet also approved building 1.09 lakh km of rural roads under the Pradhan Mantri Gram Sadak Yojana over the next three years. This will entail investments of Rs 88,185 crore. Besides, 5,411 km of roads worth Rs 11,725 crore (including upgrading and rural roads) in 44 left-wing-extremism-infested districts by 2019-20. Under PMGSY, 47,447 km was completed in 2016-17 and 36,449 crore in the year before.