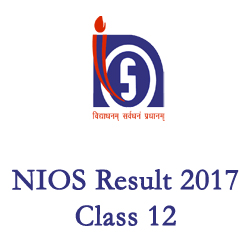 National Institute of Open Schooling has declared the NIOS 12th class result 2017 at the official website of NIOS admission at nios.ac.in. NIOS Result 2017 class 12 / NIOS Result October 2017 has been uploaded at the official website and candidates who were waiting for NIOS Senior Secondary exam result 2017 can go to nios website and check their marks in Public examination, vocation examination.

Students can check their marks in NIOS Sr. Secondary Examination – Oct 2017 result which was announced on 5 November 2017. To check subject wise marks in the result of NIOS Sr Secondary Exam, you can follow the steps given below.

Follow the instruction to get your NIOS result 2017 for class 12th.

National Institute of Open Schooling is a kind of project started by the Central Board of Secondary Education (CBSE) in 1979. Through NIOS, the government is helping the learners up to to pre-degree level and strengthening the Open School System. The Ministry of Human Resource Development (MHRD) started the initiative of National Open School (NOS) for the students who are willing to take study from their home.