The largest ever housing offering by Delhi Development Authority which started appearing in news back in May 2014 when we first reported that the scheme may be launched in July. The scheme launch was delayed due to several amendments in the rules and delay in construction of the flats. But, on Friday, 22 August, DDA has finally announced the scheme and the applications forms and the brochures will be available from 1st of September. This is the DDA’s 44th housing scheme ever.

At the very first, DDA was expected to offer at least 27,000 flats for various income groups in its 2014 scheme but end up in offering 25,034 flats out of which 22,627 units with one bedroom and a drawing room will be offered to the LIG category as announced in June by DDA.

However everyone can apply for the LIG flats. Of the total 25,034 flats on offer, 896 are new constructions after 2010. 22,627 units with one bedroom and a drawing room, 700 units for the EWS category and 811 units old DDA flats will be offered into the scheme. Below are the complete actual details of the offered flats including their location, pricing and areas for some. 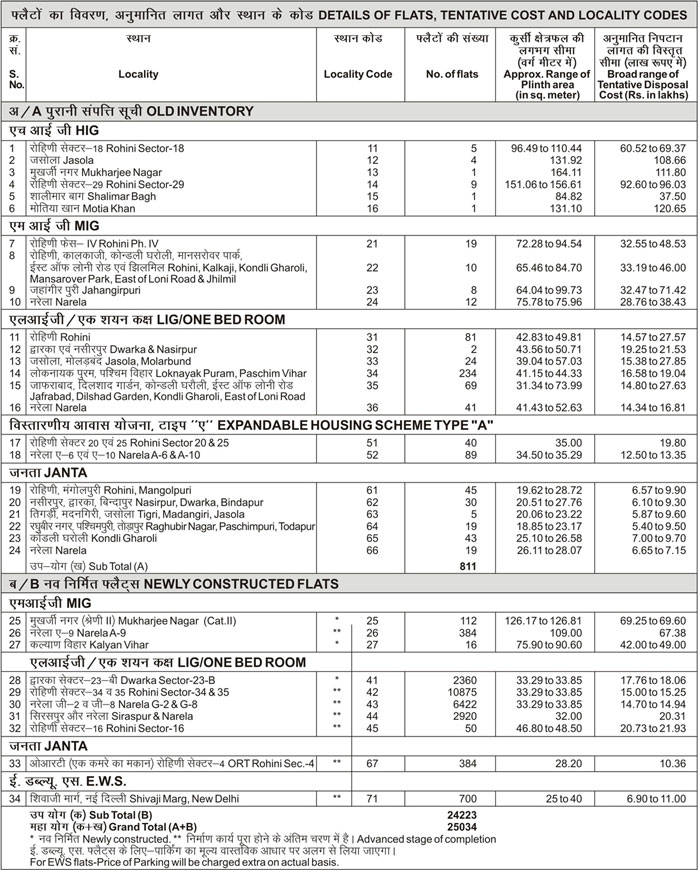 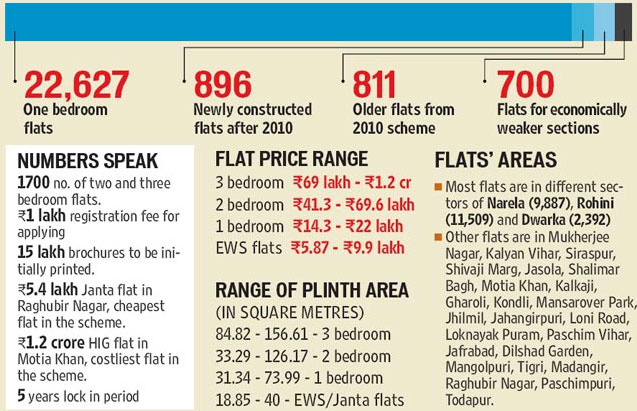 There were several amendments proposed for the new flats scheme but many were refused by the LG Najeeb Jung and the other officials due to some DDA acts not complying with the proposals or to their impracticality.

Amendments proposed included not allowing NCR home owners to apply into the scheme but the proposal was refused owing to some restrictions put by the DDA Act. The proposal of withholding the ownership of flats for 5 years was approved by LG last month in order to reduce the frauds and bring more transparency into the scheme. This was especially done to restrict investors from applying into the scheme so that the maximum people who are in real need of a home can apply. The authority has also announced the reduction in the registration amount. The applicants will be asked to deposit Rs 1 Lakh as the registration fee instead of Rs 1.5 Lakh as in the previous schemes. The registration amount for the EWS category would be Rupees 10,000/-. If the registered applicant is not allotted any plot, the amount will be refunded.

The major change denied was reserving the 80% of the flats for the people of Delhi only. Delhi Development Authority also did some small improvements/changes compared to its earlier schemes such as construction quality of of flats, all the flats being built for this scheme will be self sustainable, eco friendly and are being built using the latest pre-fabricated technology.

DDA has more than 15000 flats ready while another major chunk of flats to be completed by December this year and about 1,000 flats by March 2015.

The authority will invite the applications from 1st of September till 9th October 2014. The draw for the scheme will be announced through a third party Government agency after 20 days of the closing of registration. The authority is betting big on the green technology and the huge corpus fund of over Rs 300 crore for maintenance of flats over the next 30 years which are also the 2 main USP’s of flats in this new scheme.

Buy a brochure at Rupees 150 from selected branches of any of the 13 banks empaneled by DDA. Brochure can also be downloaded from DDA website but Rs. 150 would have to be paid separately while submitting application. Brochures and application forms will also be available at D-Block, DDA Sales Counter at Vikas Sadan.

The application form has been kept simple this time and it is a single page form. No documents have to be attached at the time of submitting the application. It is mandatory to provide the Permanent Account Number (PAN) in the application. Aadhar Number can also be provided along with the PAN but it is not mandatory.

Forms have to be submitted at any of the 13 empaneled bank’s select branches. A draft of Rupees one Lakh has to be deposited along with the form as registration fee.

Visit here to view the complete list of bank branches for obtaining application forms and brochures for offline applications.

Who can not Apply?

1 September – Scheme to be launched.
9 October – last date of filing application
October end – Allotment of lots through computerized draw
February 2015 – time by which registration amount of unsuccessful applicants will be returned.
March 2015 – deadline for handing over of all flats by DDA

VISIT http://dda.org.in/ddanew/Hosing_Scheme2014.aspx for more information about the scheme. 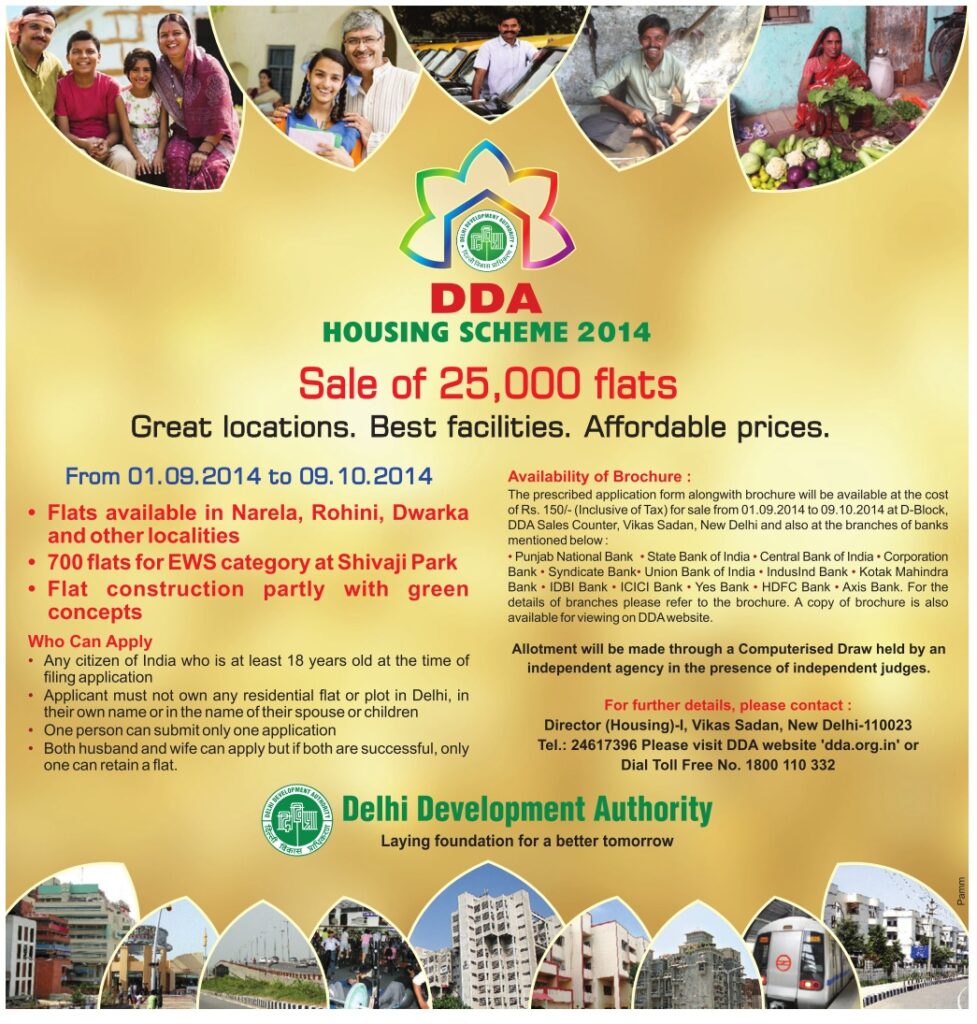